I don't think I've ever officially declared it, but Changeman is my favorite Sentai series. The characters, the stories, the cast, the scale of it -- there's a lot I love about the show. Hiryuu Tsurugi/Change Dragon is my favorite Red hero, and I give a lot of credit to the actor, Haruki Hamada, who I really admire.

While Changeman was his first television starring role, Hamada was a dramatically trained stage actor whose teacher encouraged him to pursue auditioning for the show because he thought it would be a good experience for him. At the time, Hamada was one of the youngest actors cast as Red -- 23 at the start of filming in late '84 -- and I think this is something that helps shape the way Tsurugi differs from a majority of his predecessors. One of Changeman's big themes is the way the big space war changes the five young soldiers, how it forces them to grow up, and while Tsurugi is a dependable leader to the team, he's not the one with all of the answers, the stoic guy who has it all worked out -- he goes by gut, he can become too emotionally involved in a case, he puts himself out there if he thinks he sees an injustice. From the very first episode, he's the one who speaks up when he thinks Ibuki has gone too far; his leadership is apparent when he's the one who inspires the other four to stand up to Gozma just as they feel like they're finished. (Episode 47 shows he was even this way as a kid, when saving Aira from rock-throwing bullies.) But he's not perfect, the next couple of episodes highlight the way Tsurugi takes a solo approach, having to learn that he'll have to lean on the others and the Earth Defense soldiers when the burden becomes too much.

With Hamada's training, he provides subtleties that make Tsurugi feel like more than just a standard larger than life superhero, but a human. He grounds it all; Tsurugi is compassionate, but can be very intense, and I think he has more going on than most of his predecessors and is a refreshing change. His theater background makes it so he can sell the hell out of those grand superhero speeches, but an adeptness at handling the emotional material, treating the material seriously and never hitting a false note. I like all five Changeman performers and think they're talented and have a good chemistry, but I credit Hamada with a lot of getting the hero cast to unite and bring their A game and reach that point where they have such a good rapport. (I've always given a lot of credit to the dramatic actors in Changeman for getting everyone to up their game; in addition to Hamada, there's the veterans like Ibuki's actor, Jun Fujimaki, and Giuluke's actor, Shouhei Yamamoto, who both treated the material seriously and, in Yamamoto's case, really lifted his role into being a really memorable character. There's a lot to be said for good actors -- great directors can't get much out of bad actors, but there's plenty of examples of good actors doing more than what's on page or even being great in a bad show or movie. In Changeman's case, it's nice that the show had a good, observant staff -- it always seemed to me like they paid attention to what a performer like Hamada or Yamamoto, especially, would do, and would mine their performance for further material. Yamamoto has a track record for playing really nasty villain characters, and he begins Changeman being far more subdued, for example, but the Super Guiluke arc is when the writers let Yamamoto cut loose with just how sinister he can be; there's a vast difference between the old and new Guiluke.)

Tsurugi is responsible for setting into motion some of the series' most pivotal moments; his care for Nana and faith in Shiima led to two of the most important allies in the Great Gozma War. He had a willingness to assist villains, if they seemed to need his help: he took a lot of pain from Super Guiluke that was intended for Gator, to spare Gator so he could be at his wife's side while she was in labor, which in turn led to another ally joining their cause; he was even willing to help out his rival, Buuba, when he saw that Super Guiluke was trying to force him into being a Space Beast Warrior, and trying to get Buuba to rejoin the worried Jiiru. There's times in toku where...you kind of can't buy the way a hero is depicted as being so goody-goody that they're willing to help out a villain on a whim, but the way it's written in Changeman is consistent with the storyline, but again, I think a lot of credit is due to the way Hamada plays it. I chuckled at Sunvulcan when the three of them salute Amazon Killer after killing her, but you can believe that Tsurugi felt sorry enough for and respected Buuba as a warrior enough to bring flowers to his grave.

One of my favorite episodes, which isn't that crucial of an episode, it's a bit of a throwaway after the conclusion of a five-part arc, is the episode where Tsurugi fakes his death in order to launch a sneak attack on the monster of the episode. It shows the lengths Tsurugi will go in order to defeat a monster. Really bum out his friends by faking his death? Sorry, guys, that's part of the job. Don't question Tsurugi!

One of my all-time favorite Sentai episodes, though, is episode 54. In their final battles, the Changeman are really just against the clock and become pretty desperate -- not only does Ahames cripple their efforts by destroying their base and equipment, but there's also the threat of the Gozma Star colliding into the Earth, and Super Guiluke at that point is just crazy powerful with his demonic powers and wreaking all kinds of havoc in the Gozmard mothership. So, Tsurugi makes the call to sneak aboard the Gozmard, on his own, and take Guiluke out. It's not some typically big, over-the-top, glorious samurai-esque final battle they'll have: they're desperate, and it's going to be more like an assassination. It's a bit of an interesting gray area for a Sentai show to present its hero, IMO. Dragon sneaks up on Guiluke, and if it wasn't for Guiluke noticing Dragon's reflection at the last minute, he wouldn't have known what hit him, he would have been a goner. The way Hamada plays the scene when Tsurugi decides to leave for the Gozmard, he knew it was most likely a one way trip. And, if not for Nana, Tsurugi might NOT have made it out alive. Guiluke is still critically injured, though, but goes on to fight after turning HIMSELF into a monster! When things get rough for Gozma, Super Guiluke runs around turning all of the regulars into monsters, and while it seems like a lot of it is out of spite for how they turned on him, it's really that the endgame has been set in motion. You might even think Guiluke is cowardly, but he walks the walk -- when the chips are down, he turns himself into a monster, as well. The old Guiluke had once been treasonous to Star King Bazuu, but Super Guiluke had a confidence and dedication -- he became as dedicated to serving his army as the Changeman serve theirs. And it's the wound that Dragon gave Guiluke that is his undoing.

You just don't fuck with Tsurugi. His bad side's a dangerous place to be.

So, Tsurugi being my favorite and all, for my birthday a few weeks back, a friend made me this: 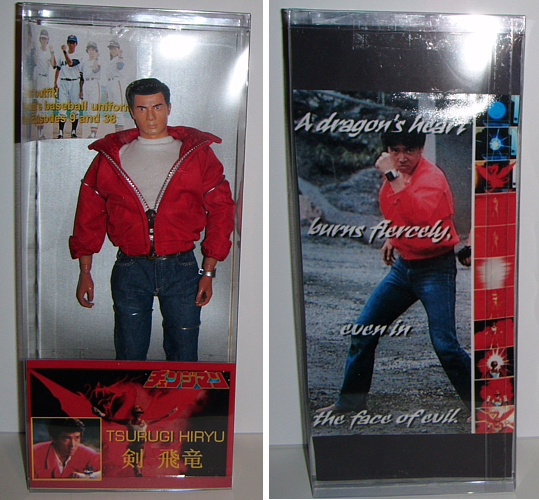 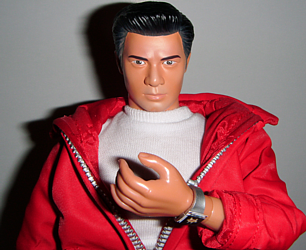 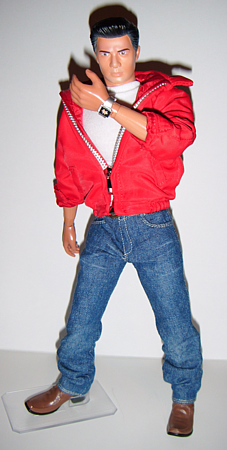 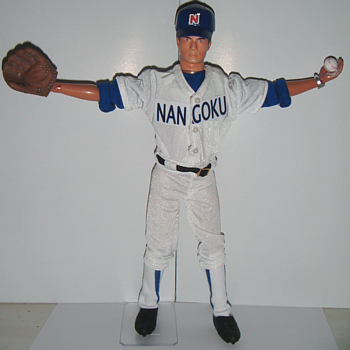 With the baseball outfit! The baseball outfit! And, shut up, the baseball episodes are awesome! And before anyone says there isn't an actor likeness, well...that's the problem if you don't want to sculpt. Also, there seems to be a real lack of Asian-faced dolls out there. (This doll IS Asian, but it doesn't come across in the photographs.) Besides, other than Medicom, I can't really think of when the official Japanese toys care to capture an actor's likeness. Most of the time, they'll just be vague anime-ish faces. I mean, here's what the official unmasked Dragon toy they did come out with looks like... 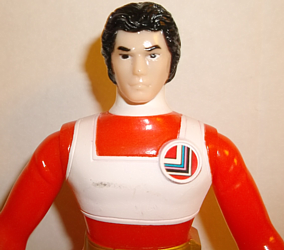