Any fan of the '80s shows can tell you -- the merchandise from those shows can be pretty expensive nowadays. When I was after some of the henshin braces, the prices tended to be for a few hundred dollars. Mint-in-box mecha would be near seven hundred dollars. But this...this, man...I think it's a new, disgusting*, ridiculous record. 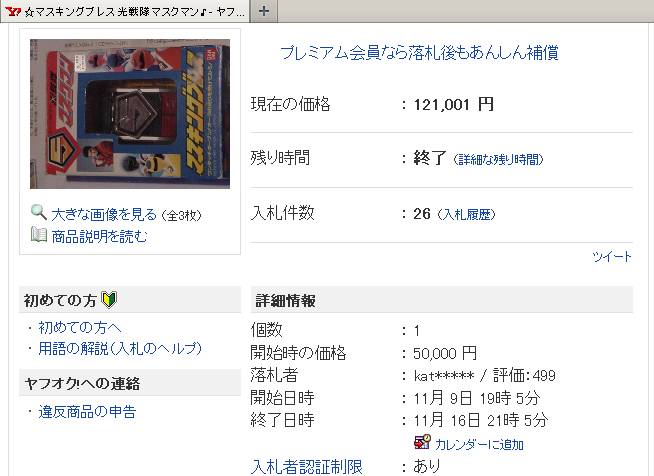 The elusive Masking Brace, which shows up on auctions about once a year, has been going for some crazy prices, but...12,201 yen! That's $1,200.00 USD! That's more than a lot of the mecha will go for! That's...that's...that's a goddamn home entertainment system! That's a trip somewhere! I know it's rare, I know it's old, but...that's a lot of money for a plastic watch. (Thank goodness the Masking Brace isn't one of the henshin braces I'm interested in -- I remember it seeming pretty unimpressive as a kid, especially after you've had something like the Change Brace. In '87, I wanted one of those Black belts that worked with the TV, dammit.)

I think Bandai Japan's morons for not jumping on this, doing a kind of Sentai equivalent to the Legacy Morphers and doing new version of the old henshin braces. If there are nuts out there willing to drop over a grand on one, then Premium Bandai's crazy pricing shouldn't make them blink an eye. But, no, knowing the way Bandai works, IF they did it, they'd start with the overrated Sunvulcan, nobody would want to buy it, and then the line would die. GET OVER YOUR LOVE FOR SUNVULCAN, TOEI! 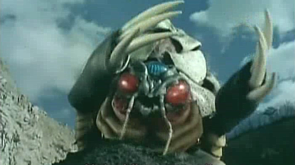 *I'd like to clarify that I don't mean disgusting that someone wanted it bad enough to pay that price, but that it's disgusting they have to pay that much to get it.
Posted by Shougo B'Stard at 5:12 AM 2 comments: