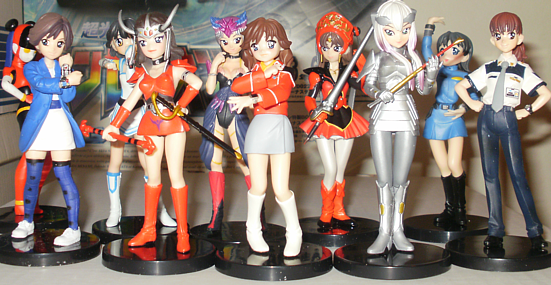 When Boukenger was airing, Bandai decided to release small figurines in honor of the heroines of the franchise, called the Girls in Uniform series. These figurines are "anime-ish" renditions of the characters, but thankfully aren't as obnoxiously cute as figurines of this sort can be. (I'll again say "thankfully," because I felt these figurines could have easily been crossing a threshold of nerdiness that even I feared.) Needless to say, I was excited to see older characters be recognized -- Changeman's Sayaka was in the very first release! Pretty much each installment had a character I liked and was interested in buying. But, of course, Bandai made some glaring omissions. (I'm still surprised they skipped doing anyone from Jetman. Jetman! Toei's "golden, historic, legendary" series!)

A couple of gripes before I proceed. One: some of the choices baffled me. Of course, obnoxious new characters like Natsuki/Bouken Yellow would get released. But did they need 10 different versions of Jasmine and Umeko? Did they really think Magel from Magiranger would fly off the shelf? I like Liveman's Koron, but she's not a girl or in a uniform -- she's a machine! And for crying out loud, they released Go-onger's Kegareshia! And, wouldn't you know it, Kamen Rider had to weasel its way in, despite being a boys club that barely has notable female characters, let alone "heroines." And -- coincidence? -- that's right around when the Girls in Uniform series ended. (At least they released Sumiko Ozawa, though.)

Nevertheless, they released a lot of characters I liked. But I wanted Maskman, dammit! Namely...Momoko.

Momoko's one of my favorite Sentai heroines, and a lot of people have been copying me have come around to appreciate her more. I really like the actress who plays her, Kanako Maeda -- I think she's a pretty good actress and a great match for the Momoko character. A lot of people write off some of the older Pinks as being too cutesy, with their heart motif visors or earring helmets or ribbon weapons, but if they took the time to watch the shows, they'd realize that most of them kick ass. The first two Pinks, Risa Komaki's Peggy/Momo Ranger and Michi Love's Karen/Heart Queen were JAC ass-kickers! How cool is that? There wasn't a male JAC hero until Kenji Ohba in Battle Fever. Peggy and Karen were saving Japan the world at the same time Kenji was just an extra in Sonny Chiba movies!

Momoko's certainly an ass-kicker, but I think she also stands out because she has attitude and a sense of humor -- she's supposed to be sassy (which comes off most in the episodes written by Toshiki Inoue), and some Japanese materials refer to her as being "mischievous." Maeda just nails both extremes. And she's not afraid to let loose and unleash fists of fury on a monster or put herself out there and look silly for a joke. (The expression on her face when she leans into frame to nib over Akira's shoulder at the letter he's reading is one of my favorite bits of hers. What a wise-ass!) And if you've watched my Onna Senshi R Tuff Enuff video, you'll recognize one of my favorite scenes of heroine ass kicking -- when Momoko goes Berserker Rage on a bunch of Angler soldiers and the Skeleton Dogler, punching a hole right through it!

A few moments of Momoko awesomeness:


So I wanted my Momoko Girls in Uniform! I had seen Japanese fans post pics of some customs they did, which usually just involved swapping the heads from different figures. (For example, one fan bought a Momo Maruo and gave her Saki/Go-on Yellow's head to make her a Juri/Oh Yellow figure.) But there was one fan on LiveJournal who went to the trouble of repainting figures to make the characters they wanted, so I tried to do the same in order to have my Momoko figure. And here's the result... 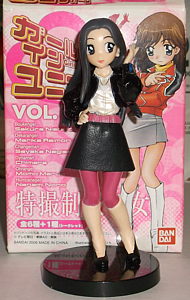 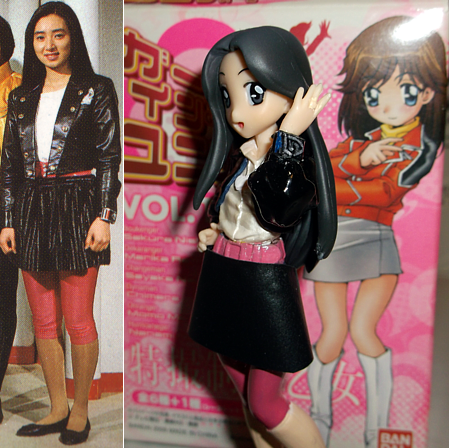